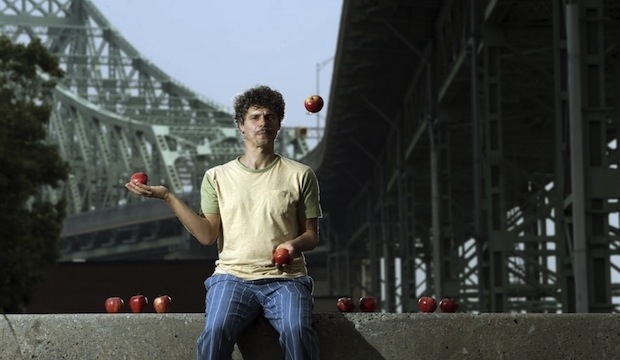 Gandini Juggling: The Marriage of Circus and Theatre

Just minutes into a conversation with Sean Gandini it becomes clear that the interview isn’t going as planned. His quick-silver mind flits from subject to subject, effectively disrupting any carefully constructed sequence of questions.

This is actually in keeping with the topic that brought us together: Gandini Juggling’s Smashed, the show that opens this year’s London International Mime Festival. It “challenges preconceptions” and “disrupts careful constellations of fruit,” says the programme.

Smashed is not a new show. It was created in 2010 and very favourably reviewed by Culture Whisper in a more recent outing; but for LIMF’s 40th anniversary edition, Gandini Juggling are presenting a specially enhanced production with more performers and a number of “surprises” on which Sean will not be drawn.

“This summer at a big European juggling gathering of 6,000 people we did a Smashed with 20 people.” Gandini explains. “And Helen [Lannaghan], who is one of the directors of the Mime Festival, knew that we were doing this, so she asked me for a kind of remix of the show, which is so exciting.”