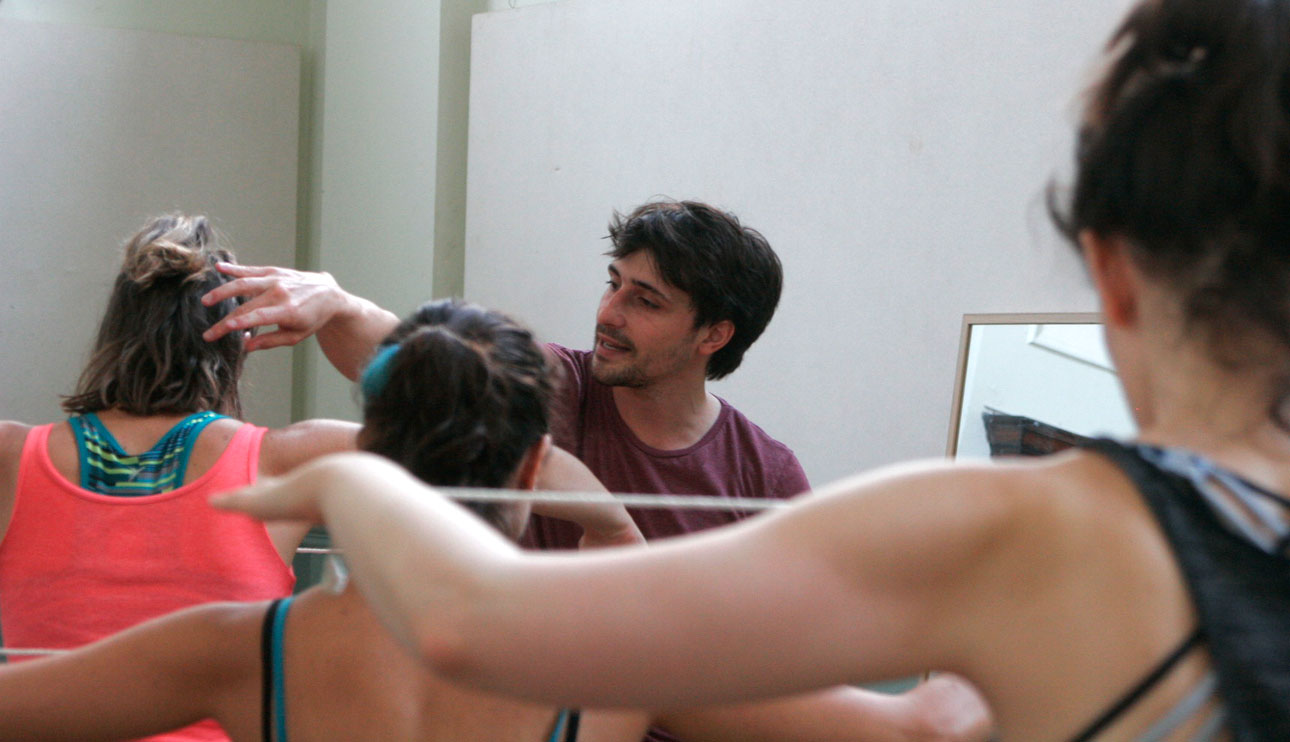 Our famous workshops are always in high demand. For the 2018 Festival we presented five workshops by leading practioners at Jacksons Lane; a Guillaume Pigé workshop at Shoreditch Town Hall; two clown workshops with Angela de Castro and two puppet workshops with Liz Walker and The Paper Cinema as part of a new collaboration with Little Angel Theatre in Islington. All the workshops sold out.

THEATRE RE
The Moving Reverie
Led by Guillaume Pigé more about this workshop >
To have an idea; to hesitate and stop; to question; to decide; to stop again and doubt; to check... The actor on stage lives through all these different ways of thinking second by second. The challenge is to allow all these inner impulses and ideas to flow into expression and become visible to the audience.
In this week-long workshop designed for professional and semi-professional performers, participants will immerse in Theatre Re's vital approach to Etienne Decroux's Corporeal Mime and explore how to give physical shape and theatrical rhythm to these impulses.
Guillaume Pigé is an actor, director, mime and magician. He formed Theatre Re in 2009 and has been directing and performing in all the company's productions to date. He is also an Associate Teacher at R.A.D.A and is regularly invited to give workshops in the UK and internationally. more about this workshop >
‘Clowning offers to the theatre practitioner an immense spectrum of new possibilities, a freedom that we can’t find in any other art form’.
Clowning is an art of courage and discipline; not a technique but a state that needs to be explored fully. This course offers 10 days of serious and enjoyable aimed at developing the clown’s intelligence, and the confidence to use and apply this unlimited power of imagination in any creative or performance context.
Come prepared for challenges and change. It is a rare opportunity to work with a theatre practitioner who for over 30 years has been seriously dedicated to research into, and use of, clowning, in all aspects of performance. This is a safe space to work, with expert guidance through de Castro’s methodology for each participant’s individual journey of development as a performer. It creates a supportive world in which participants can joyfully make mistakes – with a great deal of laughter and play along the way.
For clowns (beginners and experienced), actors, directors, dancers, writers and artists in any field – as well as all those interested in the development of creative intelligence.
‘De Castro’s gift is in bringing to the fore the sometimes very quiet voice at the centre of the artist’s being and expressing that. In an atmosphere as serious as it is playful, laughter and discipline lead to a connecting with inner truth and the principles at the heart of acting and of communicating with an audience. Experience the invigorating presence of an experienced performer who lives to share the joy and simplicity of the clown form and how it can so usefully relate to the art of acting’ Stephen Wisker (actor / director / storyteller / ukulele-ist)

thewhynotinstitute.com for more details.
booking info >
How to be a Stupid
10 day clowning workshop
Led by Angela de Castro
Mon 8 - Fri 19 Jan (not Sat or Sun)
9am – 6pm
London (details will be sent out)
Cost: £750 more about this workshop >
This weekend workshop explores the idea of embodiment as a key element in the process of developing original work. Through use of the Neutral Mask, a cornerstone of LISPA’s teaching philosophy, participants are invited to make links between movement and emotion, life and art, the physical body and the poetic body.
Participants will gain a deeper understanding of the essential dynamic forces within any art form, their vital function in the construction of artistic work, and how to apply them to dramatic creation.
Thomas Prattki is Founder and Director of LISPA Berlin, which moved its full time training program from London to Berlin in 2016.
This workshop is designed for those practitioners interested in exploring physical and devised theatre.

DIDI HOPKINS
The Art of Commedia more about this workshop >
Come and join international Commedia expert, Didi Hopkins in an action packed intensive workshop suitable for actors, writers, directors, artists, musicians, teachers and curious people. An essentially oral tradition, Commedia has to be experienced and discovered through the body, in play.
Explore the moves, masks and music of the characters, how to create comedy and physical storytelling through the body, why an emotional soundscape is crucial vocabulary for an actor, what an audience really wants, the simple rules of improvisation, and creating and playing a dynamic and rhythmic scenario.
Didi Hopkins, director/actor/practitioner, worked for many years with mask maker Ninian Kinnier-Wilson. The two developed a simple system and template to unlock the roots of Commedia and explore its roots and relevance as a vital influence and tool in the vocabulary of theatre and performance making. more about this workshop >
The quality of movement is not strained. It is precise, interesting and is the mainstay of visual theatre performance. The quality of ideas is even more important and the quality of the performer is the most important element of all. With special reference to mime, this workshop will explore the qualities of movement, imagination and the techniques needed to enhance performance.
Trained at the Royal Ballet School and with Marcel Marceau, Nola Rae MBE is one of Europe's most celebrated visual performers. She formed the London Mime Theatre in 1976 and has taken her shows to 68 countries to date.
This class is for the enthusiastic student of visual theatre, professional or amateur, who is reasonably fit and not afraid to move. Students must wear loose fitting clothes and flexible shoes. more about this workshop >
Through simple, led improvisations this workshop will cover the manipulation of materials, objects and 2 person articulated 'Bunraku' style puppets. It will explore objects as props and as characters and also ways of performing ie relationship between the performer, puppet and action. There will also be an exploration of a short text and a visual response to it.

Liz Walker was co-founder of Faulty Optic (1988-2010) which was world renowned for its visually striking shows, use of live-projected video and cronky mechanical sets. In 2011 she founded Invisible Thread. Shows include Fish, Clay Perspex, Plucked and Les Hommes Vides - 'the quirky little gem of this year’s mime festival' (The Stage, 2013)

This class is for the enthusiastic student of visual theatre, professional or amateur, who has a keen interest in puppetry. As this is an active workshop students should wear loose fitting clothes and sensible shoes.

DOROTHY MAX PRIOR
Dance Yourself Stupid more about this workshop >
From the Clown Can Can to the Egyptian Sand Dance and beyond: a workshop in eccentric, comic and stage dance open to everyone – actors, clowns, dancers, and anyone else who fancies a bit of dotty dancing! This taster workshop explores the many and various possibilities of comic and popular dance, investigating the vaudeville tradition, and exploring the potential of different dance forms in the creation of comic numeros. The day will include classic eccentric dance routines, such as those popularised by Laurel & Hardy, and the legendary Wilson Keppel & Betty; explore the comic potential of popular dance rhythms such as Charleston, Tango, Jazz, and Mambo; and subvert well-known dance traditions such as the Can Can and Saturday Night Fever.
Dorothy Max Prior is a choreographer, writer, director and teacher with over thirty years experience. She is co-director of The Ragroof Players, and makes work across the UK and around the world as Dorothy’s Shoes, most recently in Brazil directing circus-theatre show The Twins , and launching the Cabaré Excêntrico troupe in Sao Paulo.

more about this workshop >
The state of clown is like a muscle that needs to be exercised; the more practice and training a performer has, the stronger the results. Through the advanced exercises at this course, experienced clowns and actors who use clowning on their work, can stretch themselves to improve their ‘clown-fitness’ and make them better prepared to deal with even more challenging clown scenarios.
This unique workshop is specifically for experienced performers who take fun, play and stupidity very, very seriously. Attendees will be able to work alongside performers of the same level while exploring a range of advanced techniques and improvisation scenarios.
De Castro’s structured approach focuses specifically on the areas that are most challenging for the professional performer. By focusing on imagination, playfulness and the pleasure to be present, every section of the workshop has real practical lessons that can be applied to the clown’s existing performances and help structure the development of new ones. Filled with a mix of exercises, advanced techniques and improvisation scenarios, it’s an opportunity to train and play with performers of the same level.
It is a challenging, enjoyable and rewarding week of work for those who put their all into being seriously silly.
‘A teacher, a Master Clown, who is very delicate – who respects the performer in front of her and takes care to take you on the best path, so you do not expose yourself unnecessarily… A director who helps performers build and deliver their scenes with confidence’
Michelle Silveira (clown, editor Women Clowns Magazine)

thewhynotinstitute.com for more details.
booking info >
How to be Even More of a Stupid
Advanced exercises for experienced clowns
Led by Angela de Castro
Mon 22 - Fri 26 Jan
9am – 6pm
London (details will be sent out)
Cost: £400 more about this workshop >
Devised physical theatre now sits at the heart of modern theatre practice. In this workshop the performer as holistic collaborative maker is central. The participants will explore the tools of eliciting, image making, emergence, story structure and theme, to develop skills in the creation of original and authentic theatre making. David will introduce his five stage Creative Practice used by many theatre companies worldwide including Gecko Theatre (UK) and Theatre Ash (Hong Kong). It sets a out a clear framework for allowing self-led companies to develop vivid and robust work. David’s approach to teaching is provocative, playful, challenging and rigorous.
David Glass is an Internationally award-winning performer, director, teacher and creative thinker. He is one of the UK founders of the physical/visual, devised, ensemble and applied theatre movements.
‘David Glass is of the most inspiring and creative teachers of performance skills that I have had the pleasure of working with’
Mike Alfreds, Theatre Director

THE PAPER CINEMA
An Introduction to Performing Live Animation more about this workshop >
This multidisciplinary workshop aims to give participants an introduction to some of the techniques used by The Paper Cinema. Participants will learn the basics of designing puppets, narrative and storyboarding, puppet manipulation and performance, making their own piece in groups during the course of the session. At the end of the session, there will be a Q&A with the artists, discussing the fine points of the process.

Founded in 2004 by Nicholas Rawling with Imogen Charleston and Christopher Reed, The Paper Cinema creates unique, magical performances that combine the languages of animation, music, film and theatre. Accompanied by a live soundtrack, intricate pen and ink illustrations are skilfully manipulated in real-time in front of a video camera and projected onto the big screen. Sitting in full view of the audience, the puppeteers and musicians work to a precise choreography that is as engrossing to watch as the story being played out above them. With a readily transferrable DIY aesthetic, the company has performed in a diverse range of venues from village halls and arts centres to major film festivals and museums.

“An epic, imaginative voyage” Time Out (on Odyssey)

This class is for anyone interested in learning more about this unique approach to making and performing live animation. All levels of experience welcome.